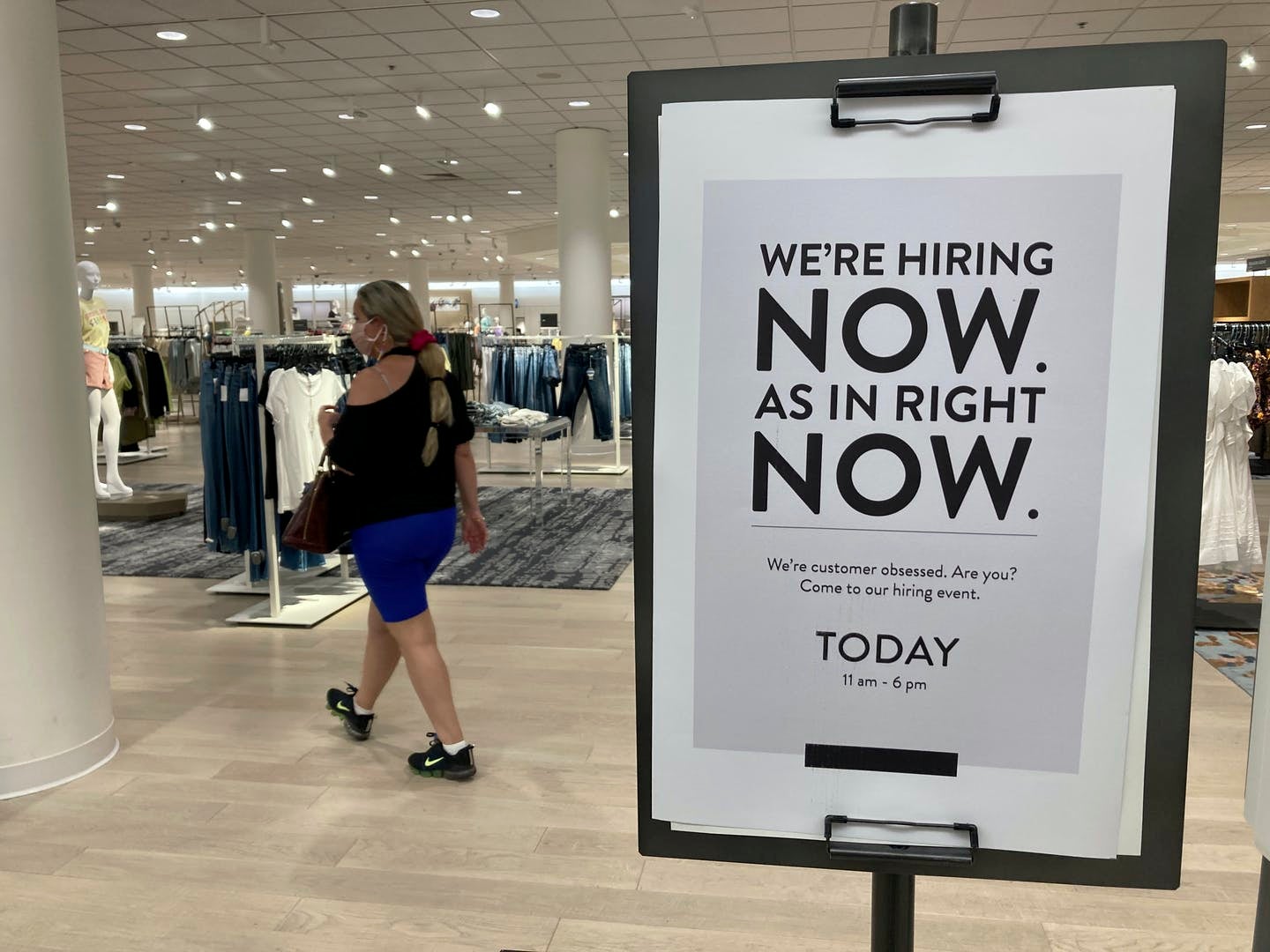 The so-called Great Resignation was one of the top stories of 2021 as “record” numbers of workers reportedly quit their jobs.

The latest figures came out on Jan. 4, 2022, and showed that 4.5 million people voluntarily left their positions in November – an “all-time high,” according to the agency responsible for collecting the data. That’s 3% of the nonfarm workforce, which headlines also proclaimed a record level.

The “quit rate” interests me because I wrote my economics doctoral thesis on how people find work. Since then I have been fascinated by how people leave jobs and then find new ones.

Data on people quitting comes from the Bureau of Labor Statistics.

Each month the bureau runs the Job Openings and Labor Turnover Survey, also known as JOLTS. The bureau interviews about 20,000 businesses and government agencies each month, which it uses to estimate several aspects of the workforce, including the number of people who quit, retired, got hired or got fired.

Since April 2021, the share of nonfarm workers who quit their jobs has been at some of the highest levels recorded by the bureau. In all, nearly 33 million people left their positions over this period, or over a fifth of the total U.S. workforce.

Certainly, that’s a lot of people. But a closer look at all the historical data we have can help put this in some perspective.

One issue is calling the current levels a “record.” The problem is the data only goes back a little over two decades, which means it’s certainly possible that the rate could have been higher at several points in the past. We just don’t know.

For example, during the dot-com bubble in the late 1990s and early 2000s, the U.S. economy was strong, which created many new jobs and opportunities for workers. These are typical precursors to more people quitting their current jobs in search of better pay and benefits. Given that the rate was 2.4% in January 2001 – a month after the quits data begins – it’s not a stretch to imagine it may have been higher than the current level at some point in 2000 or earlier.

Or another time when quits may have been higher was after World War II, when the postwar American economy was booming and the economy was in great flux.

In fact, some data pre-2000 does exist that suggests there are times when the quit rate may have been higher. The Bureau of Labor Statistics tracked the quit rate in the manufacturing sector from 1930 to 1979, when it ended the survey because the industry – which at one time made up as much as 28% of the economy – became less important.

Manufacturing workers, who make things like steel, cars and textiles, were quitting their jobs at a monthly average rate of 6.1% in 1945, compared with the 2.3% recorded for the sector in November 2021.

Since about a third of the U.S. workforce had manufacturing jobs in the late 1940s, this suggests the overall quit rate was likely higher back then.

A lot of stories have also focused on the absolute number of workers who quit their jobs, such as 4.5 million who quit in November – on a seasonally adjusted basis.

If quits for December 2021 are similar to November, I expect about 47 million people will have voluntarily left their jobs in all of 2021. That would mean about 33% of the total nonfarm workforce quit jobs last year.

Again, that seems like a lot, but a huge swath of the labor force does this every year. In 2019, for example, about 28% of the U.S. workforce quit. JL: nonfarm, or total?

So is quitting higher than normal? For sure. But off the charts enough to earn the moniker of “great”? I don’t think so.

Not all sectors are seeing a wave of quitting

Workers also aren’t quitting in droves across all sectors of the economy. While quits are higher than usual in most industries, a few sectors are responsible for most of the turnover, with some lower than their recent peaks.

The highest quit rate is in accommodation and food services. About 6.9% of people working in hotels, motels, restaurants and bars gave notice in November. While that’s the highest since 2000, voluntary turnover in this sector is usually on the high side – given the nature of the work – and has been above 5% many times over the past two decades.

November’s second-highest quit rate, at 4.4%, was retail trade, which includes workers in stores and shops. Combined, these two relatively low-wage industries accounted for one third of all people who quit that month.

On the other hand, the quit rates for construction, information, finance and insurance and real estate are relatively low and have been higher in the past 21 years.

We can also see from the data that young people make up the biggest share of people switching jobs. Data from ADP, one of the largest payroll processors, breaks down turnover by age. But unlike the JOLTS data, ADP doesn’t learn why someone is no longer working at a company – whether they quit, got fired or something else – so it can track only total turnover.

High turnover for young workers is not surprising, in my view, because COVID-19 restrictions have canceled many nonwage benefits like after-work socializing and company parties. For younger workers new to the labor force, these types of activities are important in developing company belonging and loyalty. Without them, there are fewer ties binding these workers to a company.

Nevertheless, just because the quit rate isn’t at a record doesn’t mean there isn’t a problem of too much turnover in the labor market. But that problem appears to predate the pandemic.

High annual quit rates mean many workers are not satisfied with their job’s pay, benefits or working conditions. And that can be a huge waste of time and money for both companies and workers. Hiring and training workers is expensive. And searching for new jobs and switching jobs is physically and emotionally difficult for workers.

Research shows employers can minimize turnover by many different methods, such as by giving workers a sense of purpose, letting them work in self-directed teams and providing better benefits.

[Over 140,000 readers rely on The Conversation’s newsletters to understand the world. Sign up today.]

Individuals thinking about quitting should ideally find another job before quitting. You have a much higher chance of success transitioning from one job to another than trying to jump from unemployment to work.

The next time you hear about the “Great Resignation,” understand it isn’t quite as great as it seems, since large numbers of U.S. workers have been quitting for years.

This article is republished from The Conversation, a nonprofit news site dedicated to sharing ideas from academic experts. It was written by: Jay L. Zagorsky, Boston University.

Jay L. Zagorsky does not work for, consult, own shares in or receive funding from any company or organisation that would benefit from this article, and has disclosed no relevant affiliations beyond their academic appointment.