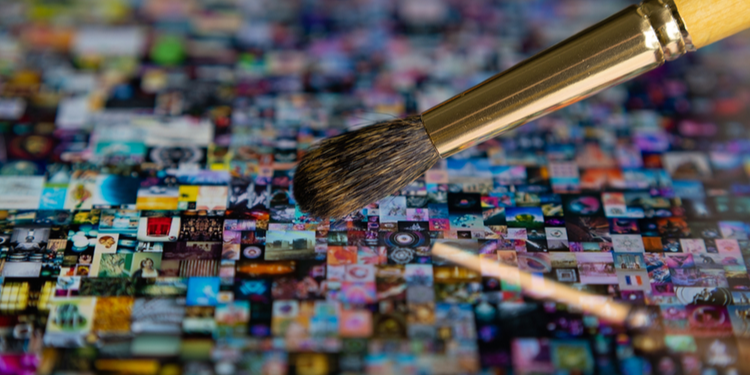 NFTs are currently making the headlines, with digital artworks selling for millions of dollars. But will NFTs actually replace tangible art, shifting yet another creative industry online?

NFTS (non-fungible tokens) are unique digital assets on a blockchain (primarily, on Ethereum) that can be verified and distinguished via metadata and ID codes. Their “non-fungible” aspect makes them strikingly different from bitcoin: as such, if you traded bitcoins, you would still get the same thing, but trade one NFT – and you will get a completely different asset. That is because NFTs vary in terms of quality and kind.

As such, pretty much any valuable digital asset can be an NFT: art, in-game items, GIFs, design and clothes, domains, and even tweets. Today, it constitutes a $40 billion market, attracting creators from a variety of sectors, with a chosen blockchain acting as a sort of auction house.

NFTs have received their wide recognition through massive art deals, which currently account for almost a quarter of all NFT sales, according to market tracker NonFungible.com. For example, earlier in March, an American artist Mike Winkelmann, known as Beeple, sold his digital artwork for $69.3 million at Christie’s, which put him into “top three most valuable living artists.” From then, he will receive 10% in royalties every time the owner of the NFT changes.

Winkelmann is quite surely not alone in his success in the digital realm. Earlier in March, one of the 24×24 pixel art images, CryptoPunk #7804, sold for $7.5 million while Trevor Jones’s Bitcoin Angel – for $3.2 million.

“NFTs can be accessed by a global community from a range of global NFT marketplaces that take a minimal (or even no cut) which allows artists to create more wealth, unlike the standard exchange of art where galleries and agents take a significant share of the artist’s profits,” Jessica Salomon, Head of Growth at Archway, told Forbes.

While artists have a clear economic incentive to produce art digitally and convert it into non-fungible tokens, the concept is still rather new, with many unsure whether NFTs are worth it.

With the traditional process of making and selling art through auction houses and galleries being so familiar, why are artists putting their trust in NFTs?

Time tells a story of an online artist, Jazmine Boykins (now going by the name BLACKSNEAKERS), who was once sharing her digital art for free – and gained quite an audience, but barely made any money. After turning to NFTs, she managed to sell the same art for tens of thousands of dollars.

“At first, I didn’t know if it was trustworthy or legit. But to see digital art being bought at these prices, it’s pretty astounding. It’s given me the courage to keep going,” Boykins said in an interview with Time.

Of course, her story is not the only one. NFTs are supposed to provide creators with more financial and personal control over their works, adding scarcity and exclusivity to the increasingly fluid digital environment. But it’s not all as good as it sounds.

Software engineer Jonty Wareing recently suggested on Twitter that the way current NFTs are created is a disaster, which could potentially make them worthless in the future.

“In short: Right now NFTs are built on an absolute house of cards constructed by the people selling them. It is likely that _every_ NFT sold so far will be broken within a decade. Will that make them worthless? Hard to say,” the tweet says.

Specifically, digital artworks are large files that cannot actually be stored on a blockchain themselves. When purchasing an NFT, a customer buys a record of an asset that is usually stored in a completely different place. This could create many underlying problems if the third-party provider goes out of business, or if the file gets changed or deleted.

It is also crucial to understand the terms of buying a token – and the permissions they give you to the associated asset. As such, the purchase of a token in itself does not automatically grant you any rights to the digital product, but the agreement with the seller does – and those agreements may vary quite significantly.

In addition, the exclusivity aspect of a non-fungible token sounds great in theory but might not work as well in practice. As such, the creator and a seller may hold a copy of the asset, as well as anyone who takes a screenshot or even illegally copies the art from publicly available platforms. Since the work exists entirely online, it is tremendously different from a physical object that hangs on your wall, being potentially more prone to reproductions.

Despite the associated technical issues with owning an NFT and environmental problems they cause (with one transaction producing 14 times more carbon emissions than mailing an art piece, according to Earth.org,) they are growing in popularity. Many experts consider them a good investment that can also gain their owners access to exclusive communities.

However, other pundits believe that traditional physical art is unlikely to disappear any time soon. Indeed, it is hard to predict the value of NFTs in the upcoming future in comparison to their physical competitors. NFTs might have already reached their peak – or they might be just taking off.

As curation and technological management remain serious challenges, auction houses are starting to join the NFT arena, forced to oblige with the standards for verifying customers and following the anti-money-laundering practices. Since many buyers prefer to pay in crypto, it may create further legal complications.

Regardless, the NFT market will likely continue to prosper in 2022. As with any industry, it does come with its inherent risks, which buyers should be prepared to face before investing. But with art, it’s important to first look at the piece itself – and then at its properties since there is little value in owning something you don’t like.

“Don’t buy it because it’s an NFT,” Evan Cohen, Co-Founder of Vincent, told CNBC. “Buy it because you like the art or buy it because you think the collectible is cool or the community is cool. You want to participate for the asset, not the underlying technology that powers this.”

Written by CyberNews exclusively for Entrepreneur. CyberNews is a research-based online publication that helps people navigate a safe path through their increasingly complex digital lives.