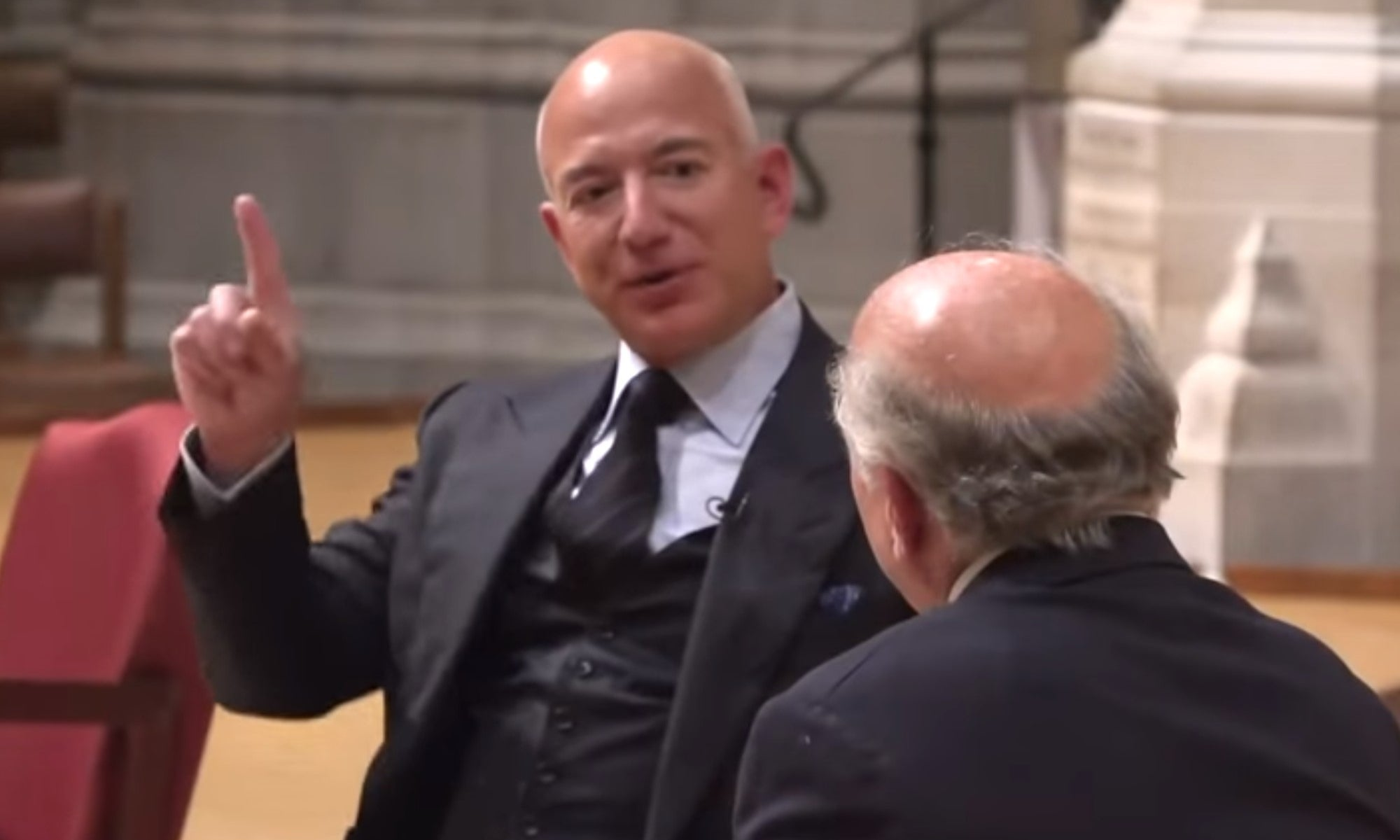 Just over a month ago, Elon Musk revealed his forecasts for humanity , which include cryptocurrencies , drugs , and robots . Now his eternal nemesis, Jeff Bezos , released four predictions about the future of planet Earth and confessed that he believes in aliens, but assures that they are not interested in visiting us.

During the ‚Our Future in Space‘ event, organized by the Paul and Nancy Ignatius Program at the Washington Cathedral, the billionaire founder of Amazon said that he imagines humans living outside Earth in spacecraft, while our planet is become a vacation destination.

The predictions of the founder and CEO of Blue Origin have left many speechless, but the big reveal was that he believes in aliens.

„How can there not be aliens? There are so many stars in this galaxy alone, and so many galaxies, that the odds that we are the only intelligent life in the universe seem small to me, „ said the world’s second richest man.

When he spoke about the possibility of these beings visiting Earth, his blunt answer was „I highly doubt it.“ Jeff explained that the aliens are probably very advanced and are not interested in getting out of their solar system. “I think we would know if they had. But are they out there? Probably, ” he agreed.

Jeff Bezos‘ predictions about the future

The 57-year-old mogul has worked hard in recent years to get his aerospace company to send humans out of our orbit, but clarified that his ultimate goal is to save the world.

“Hence the name Blue Origin, because our origin is this blue planet and it is the most precious planet in the world. We must preserve and conserve it, and make sure that our children and their children and those who follow, have this beauty in their lives, „ said the billionaire.

“What I want Blue Origin to do, as long as I live, is create this path into space so that future generations can build a life in space. And it is not about leaving Earth, but about saving it. […] We need to be able to go into space so that we can preserve this planet, „ he added, before noting that “ we must restore the nature that we have lost. „

For that to happen, Bezos poses a not-so-far-fetched futuristic scenario.

1. Industrial activity will be sent to space

„This planet is so small that if we want to continue growing as a civilization, using more energy, much of that in the future will have to be done off-planet,“ said the businessman. He explained that it will be necessary to build power plants in space   to meet the growing energy needs of humanity. However, consider that most of that energy will be consumed in space itself before reaching the planet. Also the factories and everything that generates pollution will be sent outside the Earth.

2. We will inhabit huge spaceships

While Elon Musk has already sold all his houses to colonize Mars, Jeff Bezos thinks that making a planet habitable is „very complicated.“ Therefore, he believes that the most feasible thing is to build gigantic floating colonies in space to make them our new home. He described that these ships would have a cylindrical shape to create artificial gravity when rotating, very similar to what was proposed in the movie ‚Elysium‘.

The Amazon founder said that these colonies „will not be like international space stations“ , but that their environment would replicate the conditions on Earth, with abundant vegetation and animals. In addition, they will be located very close to our planet in case we want to return.

3. Humanity will develop outside of Earth

According to the magnate, the world population will continue to grow and this planet will be able to support “let’s say 10 billion humans” , but “the solar system can support a billion people” . In this scenario, Jeff predicts that millions of individuals will move to the aforementioned space colonies. “Most or many of the inhabitants will be born in space. It will be your first home. There they will be born, live and develop their professions ” , he explained.

4. Earth will be just a vacation destination

Throughout the interview, the creator of Blue Origin made it clear that his entire project is aimed at saving the planet, sending its inhabitants into space. But, as we mentioned, he also contemplates returning from time to time, which is why he believes that the people of the future will „ visit Earth as you visit Yellowstone National Park today.“

Here we leave you the complete interview: